This was the most relaxed and comfortable I had been all winter. I was originally just going to be in Reykjavik and Amsterdam but decided I wanted a little break in Gent for the New Years weekend… so I got a train ticket and set off.

The ride over was fairly short and, because I booked the trip for early in the day, I was able to look out of my window to see farm animals and meadows for miles on end. When arriving in Gent I had yo rely on the screens in the station and maps I got at the Visitor’s Center because I didn’t have any internet or phone. I made my way by bus to my hosts’ dorm and waited. It was a little chilly (which it turns out is unusual for Gent) but a pretty good time.

I didn’t get so lucky in Reykjavik with Couchsurfing so had to pay a buttload of money to stay in a hostel, same for Amsterdam. But I did get lucky in Gent and my host was the most amazing person ever! She was a student like me but from Canada and working on her Master’s. She made me cookies and offered me her bed – the girl was a godsend. When I arrived, she had guidebooks and a really cool map of Ghent for Young Traveller’s, which you can see below (this isn’t the version I got but pretty similar).  I basically followed the route with the most markings on it to see if anything was open (most things were not) and just to hang out.

And from there I set out to get to know the city, regardless of it being a weekend and everything being closed. I took this to mean that I would get to walk and get some nice photos, so that’s what I did.

The City in a Day

areas around it looking over canals, peeking inside fancy stores and chocolate shops, and even walking through the Graffiti Street.

I also walked to the plaza with the Jacob Van Artevelde statue that points to England.

I particularly loved the views of the old buildings and row houses along the canals. Theywere very low-key beautiful and relaxing. The best remedy for a cold day. I gave myself a few higgle points there with my hot cocoa in hand.

I loved exploring the Christmas Market, getting a delicious hot chocolate from Chocolaterie Cedric Van Hoorebeke and marveling at the 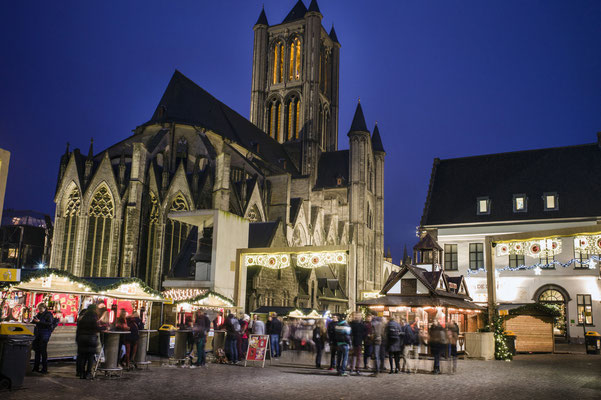 beautiful structure of Belfort. Because I was there before noon, most of the little shops were closed so I got time to walk around and admire (very budget-friendly) and even get a street waffle (which tasted like eating a doughnut) for breakfast!

We (my host and I) planned to come back that night to see the lights and the tree lit up but we did this instead.

The last night I just wanted to relax in so my host and I watched the Sound of Music which I had never seen before but now I get to check off of my list. We marveled at the Austrian landscape and teared up during the sad moments. I loved it!

After that we slept and I got up the next day at 3am to head to the train station. The walk to Sint-Pieters was short and included a nice view of Citadelpark and the sounds of birds chirping. I made it well in time and spent the entire day traveling by train, bus and plane until I got home. There, I was surprised by a message from my host having set up the tent I left her in her dorm room!

Basically, I had a really great time in such an elegant and lovely city. But one thing is for certain and that is that I have to come back, preferably during the Spring or right at the start of the Christmas Market. But all in all, I had a good time catching up on some reading and meeting a new friend! Have any of you been to Gent? if so, any recommendations?

Friend me on Couchsurfing here: https://www.couchsurfing.com/people/osiris-mancera

Hi, I'm Osiris! I'm all about living life freely with nothing holding me back. I strive for adventure and experience so traveling, eating and making friends is where I'm at. I'm a soon-to-be college graduate and kindergarten teacher as well who loves reading, painting and dogs! I post articles every Wednesday. View all posts by Osiris Mancera